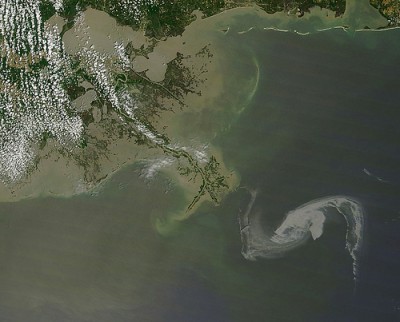 So by now everyone who doesn’t live in a cave has heard about the oil spill disaster in the Gulf of Mexico. Since the April 20th explosion of the offshore oil rig, Deepwater Horizon, an estimated 210,000 gallons of crude oil per day has been released into the waters off the coast of Louisiana. So far the slick has traveled mostly north and west, hitting Freemason Island, a Louisiana bird sanctuary, on Thursday. According to NOAA projections, oil could hit hundreds of miles of coastline from Louisiana to Florida, even traveling out into the Atlantic. There was recently an attempt to cap and funnel the leak. The attempt was not a success. Plan B includes drilling a “relief well” that could literally take months to complete.

The following media frenzy has been distressing to watch, and frustratingly shallow on facts. Media responses range across the board, from John Stewart’s Daily Show brilliant simulation of the failure to cap the oil leak, to Rush Limbaugh’s statement that the oil is as “natural” as the ocean water it’s polluting and therefore should be left alone.

It seems that this disaster has become more and more about either presenting or eliciting social (or even emotional) response from viewers, from people, from industry, from politicians. And while the human interest element is essential to maintain mainstream public attention in stories that might otherwise be considered overly dry or “science-y”, as many environmental issues tend to be, often this leads attention away from the real issues at hand. 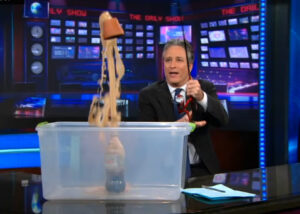 John Stewart from The Daily Show

There’s been a lot of talk about the timing of this spill, many describing it as overly convenient in the light of Obama’s decision to expand offshore drilling, which wasn’t more than a month before the explosion in the Gulf. Let me just say, very very clearly, there is nothing remotely “convenient” about this situation. The irony, on the other hand is unavoidable, and poetic in a horrifying and tragic definition of the word. There’s been accusations of sabotage and eco-terrorism thrown around based on the timing and proximity to earth day. As tempting as it is to respond to this angrily and unintelligibly… I’ll refrain and simply say that this sort of thing goes far and beyond any act of eco-sabotage. There’s no vigilante out there trying to make a statement that simply got out of hand. A disaster of this caliber is the territory of severe negligence and malfeasance, fueled by our cultural addiction to oil.

Here’s something else that could be considered “conveniently timed”. Remember the West Virginia coal mine disaster from a month or so ago? It’s not just the environment that is taking the hit here. It’s jobs, livelihoods, and human life. 11 people died in the oil platform explosion. Hundreds of thousands of jobs will be lost because of the spill. 29 people died in the mine explosion. The real question here is this: how many disasters is it going to take for us to recognize that it’s beyond time to move on to alternative, renewable energy sources?