Awhile back I was all excited about an independent documentary coming out presenting the true face of sharks and their precarious future. Luckily it was screening in Seattle, so I was able to catch it in its full movie screen glory. I checked Netflix a few days ago and noticed that it is out and available on DVD and even Blu-Ray (it was filmed all in HD, so the Blu-Ray is defiantly worth it).

Sharkwater is an epic visual journey into the oceans exposing the beauty and the peril of sharks worldwide. Rob Stewart’s aim was to create an anti-Jaws, in other words, an attempt to dispel the myths and urban legends associated with sharks (an odd little side note is the extreme regret by Peter Benchley, the creator of ‘Jaws’, for having caused an almost hysteria driven hunt and destruction of sharks everywhere leading him to be an outspoken shark conservation advocate).

I found the movie to be visually stunning, with several long cuts of gorgeous underwater vistas, schooling hammerheads and more. The cinematography is very well done and is not unlike those you would see in the BBC’s Planet Earth with life-like sharpness and amazing colors so you feel as if you are immersed underwater. The main focus of this movie centers around the barbaric practice of shark ‘finning’. Near and dear to my heart, it is the practice that, thankfully, is gaining some recognition (probably in part due to this movie). 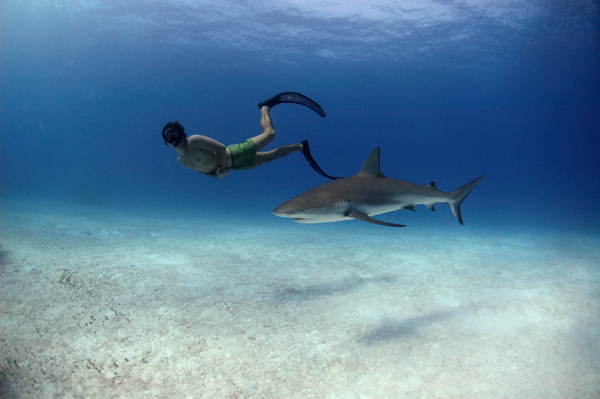 The ‘plot’ is interesting, and includes some time on the Sea Shepard Society’s boat with Captain and ‘Rouge’ Conservationist Paul Watson (who now have their own show on Discovery called ‘Whale Wars‘), but seems a bit choppy at times. There is a bout with ‘flesh eating bacteria’ and a run in with corrupt officials and organized crime syndicates, both which failed to captivate me in their intended way.

Moving away from the traditional documentary genre, the well intended storyline follows much like a generic Hollywood movie with the integration of a ‘sexy protagonist’, an seemingly insurmountable obstacle to overcome with action scenes and mounting suspense. Problem being the ‘sexiness’ verged on vanity, the action scenes appeared exaggerated, and the suspense was contrived. I believe the film would have been much more enjoyable if it would have allowed for the natural suspense of the situations to carry through giving it a more real, raw, and un-masked feel. It’s as though the movie was formed to fit the Hollywood framework rather than allowing the message, the destruction, and the journey to tell the story.

That being said, the overall message is not lost and cannot be ignored. Winning countless awards and film festivals from around the world and rating a very impressive 8.0 on IMDB and 81% on Rotten Tomatoes, it still remains one of the most beautiful, entertaining, and greatest shark movie I have ever seen. Well worth the rental or purchase price and great for the whole family. It simply must not be missed. I plan on including this film in my Blu-Ray library, and it will sit right between BBC’s Planet Earth and Discovery Channels Shark Week series.

What is Shark Finning?

Are there laws against shark finning?