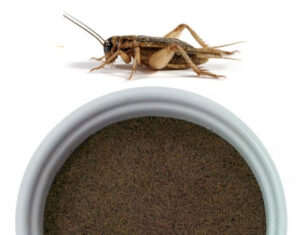 Whether you are Paleo or just looking for a more sustainable protein source, insects can be the answer. Eating insects to supplement one’s protein is nothing new, many cultures have been doing it for centuries. In fact 80% of the world still eats insects on a regular basis.

What makes insects sustainable?
Lets answer that by first looking at our traditional meat protein sources common in the US and western world. Raising cattle, pigs, and chickens is very energy intensive and can have a lasting environmental impact. Looking at it from a lifecycle and production standpoint, major impacts occur with:

Feeding
It takes 2,400 gallons of water and 13 pounds of grain to produce one pound of beef. Today, over thirty percent of our land is grazed by, or used to grow grain crops for feed.

Land Impacts
Hundreds of thousands of acres of forest have been burned or cleared to create grazing fields for beef production. This results in extensively damaged ecosystems, native species habitat reduction, and is a major contributor to global warming. Additionally, the EPA reports waste from animal agriculture operations has polluted 35,000 miles of rivers in 22 states and contaminated groundwater in 17 states.

Transport and Storage
Most livestock need a lot of room to grow, and need a nearby food source- neither of those are in cities where most consumers live. They must be processed, transported, and stored in climate controlled environments, all which expend large amounts of energy.

Insects on the other hand can be partially fed by our waste, require minimal space, and reproduce extremely quickly. In the case of crickets, it is estimated that they are 20x more efficient to raise for protein than cattle.

Simply put, traditional meat sources are a luxury that are not sustainable for this planet.

Some new adventurous companies are putting that sustainable high protein source to work. 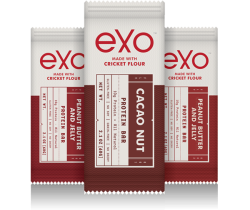 Exo is making a play for the paleo crowd with it’s cricket flour powered protein bar. Crafted with local (domestic farm raised), organic-fed crickets, these bars are formulated for taste and sustainable nutrition in mind. They have come a long way from 2,000 crickets and a blender! 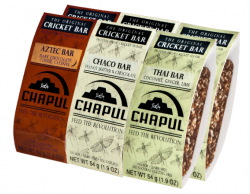 Chapul You may have seen Chapul featured on the famous Shark Tank show on ABC, but they are making their way into the mainstream with their Cricket Bars. They are on a sustainability mission, promoting the benefits of crickets as a legitimate and common protein source. They have some delicious more exotic flavors like coconut-ginger-lime and chocolate-coffee-cayenne.

Six Foods produces Chirps, a cricket flour enriched chip to add some protein to your snack. Currently still in development (as of Sept 2014), they are taking pre-orders now for this more unique take on integrating cricket flour into snack foods. I’m excited to see the result (I bet they pair nicely with some hummus or guacamole!)