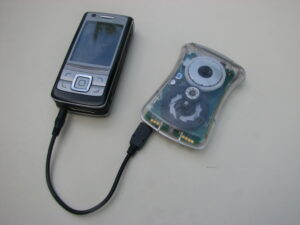 I generally type at about 65 WPM, and I like to think that this is a quite a bit faster than a typical computer user especially considering that I’ve never actually taken any typing classes. I amassed this WPM on nothing but experience, hooked to a glaring computer screen since the age of five or six (we didn’t have cable and I was easily amused). In spite of my proficiency at typing, I have nothing on the speed at which my friends text. Not yet anyways.

Like my computer experience, kids are now growing up with cell-phones, rapidly pounding out messages that I would’ve actually had to say out loud. Regardless of what can be said about how this might depersonalize our communication with each other, it is an incontrovertible fact that the world is marching along in this direction – steadily becoming more and more dependent on these small all-encompassing tools. I’ve answered surveys where I was asked about one technology without which I couldn’t survive, and without even second guessing myself, I had to say my cell phone. I can always find easily accessible computers, but when it comes to my cell phone, it stores all of my contacts along with my music, pictures, videos and even some reminders of important appointments. I can’t leave home without it charged. And I can only imagine how much more important they would than be to people who lead far busier lives than my own.

It follows than, that in such a world, emergency energy has the potential for substantial business. I myself can’t say how many times I’ve purchased Cellboost to recharge my phone after I had realized that I hadn’t recharged it the previous night. I’ve also found similar technology that relies on you plugging in AAA batteries and the like as a source of energy, a rechargeable substitute for the disposable Cellboost (which is itself not much more than smaller batteries packaged in plastic).

There are plenty of other ways to get this emergency energy though, well beyond Cellboost and such. You will find everything from chargers utilizing solar energy to chargers that collect energy from bicyclists. The general premise is the same, “there is a lot of unused sources of clean energy, so let’s use them.” Limiting ourselves to just kinetic energy chargers, the options begin to dwindle. Recently, a portable kinetic charger caught my attention and I figured, why not share it? You might recall the nPower PEG that we covered some time ago, prior to it’s launch.

This too is one that even a sun-deprived Seattlite ought to appreciate: the YoGen. In comparison to the PEG, though this too is a kinetic energy generator, it isn’t exactly the same. The YoGen can’t boast the same ease of use as you need to consciously exert energy to make it work (unlike the PEG which you can just throw into your backpack and go). In spite of this, it has it’s own advantages over the PEG. For one thing, if you don’t have over a hundred dollars to invest in a one of these kinetic energy chargers, the YoGen shouldn’t cost more than fifty. Aside from this, the PEG isn’t exactly the smallest piece of equipment while the YoGen would fit in the palm of your hand. Regardless of which one you choose, based on your own personal preferences, these little gadgets won’t be revolutionizing wall outlets any time soon. But next to those emergency one-use chargers for cell-phones, they present a cleaner viable alternative.